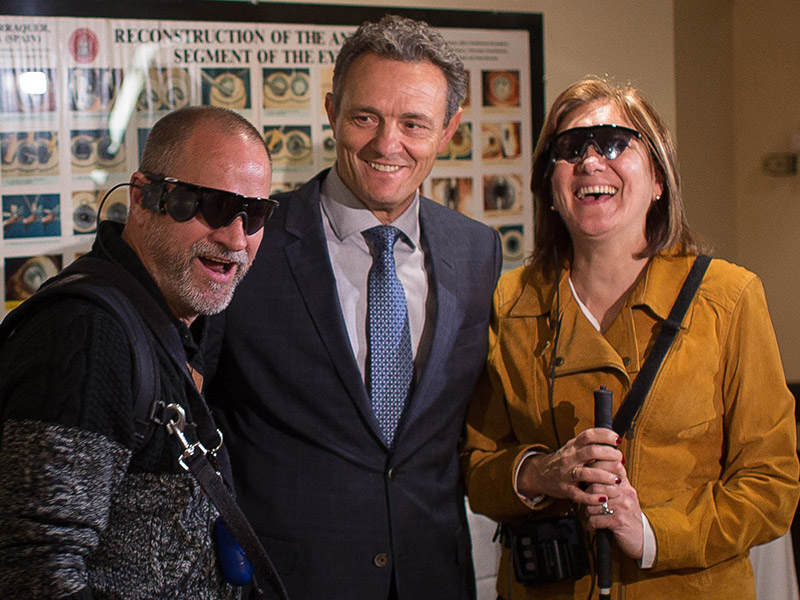 Patients evolve positively thanks to the enthusiasm and work and do not doubt that life will continue to learn," says Dr. Jerome Nadal, deputy coordinator of the department of vitreoretinal Barraquer Ophthalmology Center

Barcelona, ​​February 9, 2016. Guadalupe and Carlos were blind and what we have achieved is an achievement, again recognize shapes and silhouettes. The first three recipients of the implant "bionic eye" in Spain made significant progress in their vision and continue going to rehabilitation to complete recovery.

The third blind implanted in Spain, Guadalupe Iglesias, and the first deaf-blind European, Carlos Martinez, Spanish implanted and have also exposed their joy and satisfaction for its evolution after only two months after the surgery.

Guadalupe Iglesias has found that "has been a change in my life," especially after taking so many blind years and is optimistic his recovery, because it thinks it can get much more independence from now.

Carlos Martinez said he was "very happy to have operated" and told that although still missing five months of rehabilitation, he thinks encourage their peers to have surgery.

Patients "preoperatively are blind and what you get is an achievement" and re-recognize shapes and silhouettes, "something not imagined." The doctor explained that these people receiving implant "bionic eye", thanks to rehabilitation, may be recognizing lights, letters, syllables, shapes, contrasts and movements gradually, although they may never see again as they did before.

Veronica Pilotti, Imex and person in charge of rehabilitation, explained that lasts 6 months, 2-hour sessions to avoid fatigue of the retina, where it trains the brain to return to receive visual stimuli and in which also "important communication, memory and imagination."

Surgery is "complex", lasts three to four hours and has a team of 10 people in the operating room and 25 in rehabilitation, and only can receive people with retinitis pigmentosa 25 to 75 years representing 1,000 2,000 people in Spain. the "bionic eye" or "retinal implant" provides electrical stimulation of the retina to improve visual perception in blind people. the implant consists of an inner part, which is the pedicle and intraocular, and external based on glasses that have a small camera on the front with which they can follow the images that appear to the patient. the glasses worn by the patient fortnight after the operation, capture images and send them to a small computer the size of a mobile phone, where they are processed and transformed into instructions, and transmitted wirelessly to the antenna retinal implant. the pulses to the patient stimulate healthy cells remaining in the retina and transmit information to the brain via the optic nerve to create the perception of patterns of light that patients learn to interpret.

The team Barraquer Ophthalmology Center is very hopeful with the outcomes of patients and expected to be a push to get in the coming months, queel implant "bionic eye" into something more everyday instead of something extraordinary.

The news in the main national media: