Visual oddities. The illusion of the arches and the perception of size
Request an appointment
News

Visual oddities. The illusion of the arches and the perception of size 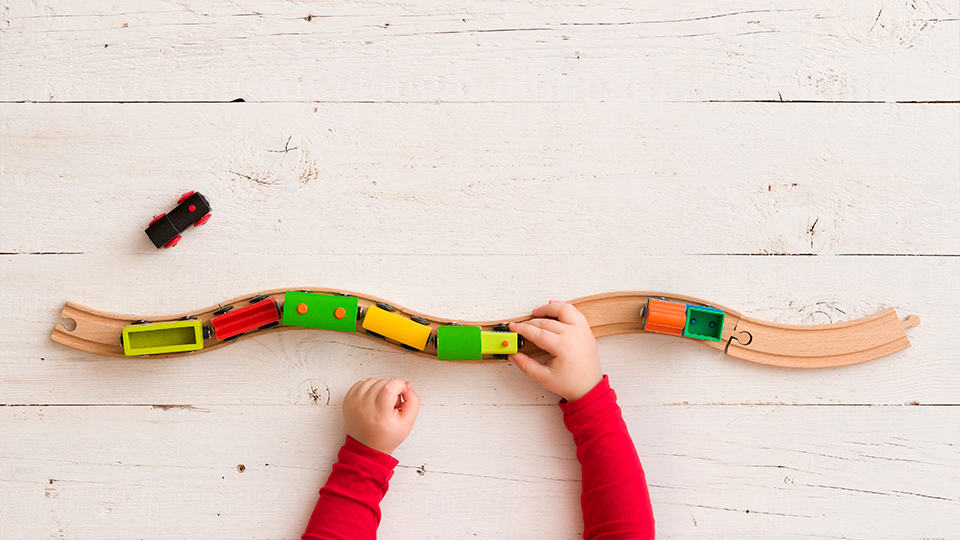 American psychologist Joseph Jastrow was the subject of our previous edition (see revista Barraquer num. 36) on the famous “duck-rabbit” figure, an example of the bistable ambiguity in the recognition of animal heads. Also attributed to him is the illusion of the “arches”, the “ring-segments” or the “Boomerangs”, which looks into how we perceive the size of objects. If we place two equal adjacent arches on their curved side, the one that remains “on top” (on the convex side) appears to be smaller. If we try it with miniature train tracks (fig. 1), it’s easy to see how two real identical objects seem different by arranging them like this, especially if we line up one end of it. 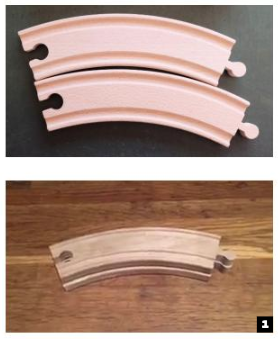 Figure 1. Above: Two pieces of a miniature train track, placed adjacently on their curved side, a real-life example of the Jastrow illusion. The effect of the apparent difference in size is very distinct, but if we overlap the pieces (below), we are shown that they are identical.

Jastrow described this illusion in 1892 (fig. 2, above), although a first version (fig. 2, centre) already appeared in 1873 in a book on the curiosities of nature (The World of Wonders), as did the multiple figures in the work of German Franz Müller-Lyer (1889), known as the illusion of the “size of the arrows” which is named after him. Later, German doctor and physiologist Wilhelm Wundt—the first person to call himself a psychologist—, would reproduce it as an “illusion of area” in the first essay on this topic (fig. 2, below). Here, the pieces are arranged in the middle and the effect is lesser than if we line them up on one end, but the illusion of a “different area” remains. The illusion also declines as the curves separate or if we put them vertically. 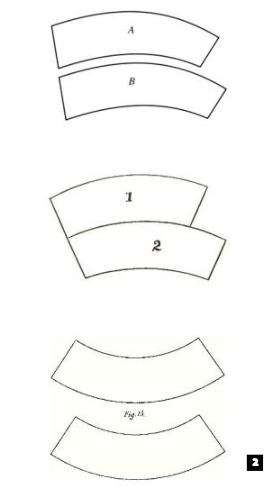 Other similar illusions show how identical arches may appear to be different depending on their shading (Y.I.  Perelman, 1913, fig. 3, above), or if they are arranged concentrically with different spaces, despite having the same radius (“size-arch” illusion, fig. 3, centre). This effect has also been used for recreational purposes, like in the “David and Goliath” illusion (fig. 3, below).

Figure 3. Above: The blue arches are identical, but they appear to be different depending on their shading (Perelman, 1913). Centre: The concentric arches (above) appear to have different radiuses—“C” is “flatter”, and “A” is shorter and more curved—, but when both sides are covered (bottom) we see that they are parallel, with identical curvature. Below: “David and Goliath” illusion, another variant of Jastrow’s illusion.

These illusions have explained why our vision tends to compare objects according to their closer or more adjacent lines, or why we judge the size of all objects by the line of contact with the neighbour (the principle of assimilation). The brain would get confused by the difference in size between the largest and smallest radiuses, as the short side makes the adjacent long side look longer, while the short side makes the short side look even shorter. In turn, this is because perception tries to build a three-dimensional world from the two-dimensional images of the retina. Another explanation is based on the fact that the mind should reconstruct the world using small fragments of the visual field. It has also been associated with other illusions of perspective and size comparison such as those of Ponzo, Delboeuf or the Leaning Tower. 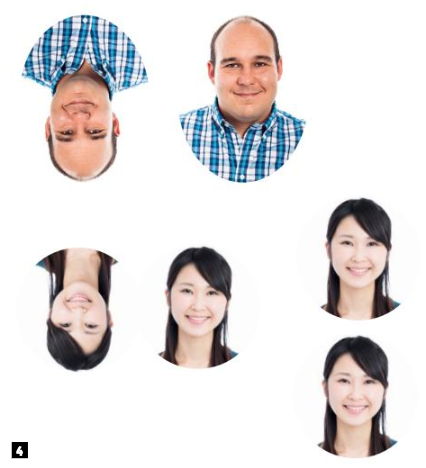 Figure 4. Above: Fat Face Thin Illusion (Thompson, 2011). The inverted face looks finer than the right one. Below: If we take the same illusion and its variant and arrange the two faces (right) vertically, the one below seems thicker (Sun et al. 2012).

Although the illusion of Jastrow’s arches has been explained using different theories, none have been accepted as the definitive one. This indicates that apparently simple phenomena like the one at hand are rooted in deep perceptive mechanisms. In this regard, it has been proven that position and orientation also influence the perception of complex objects. If we arrange identical photos of a face in opposite directions, the correct one seems fatter than the inverted one (Fat Face Thin illusion, P. Thompson, 2010, fig. 4, above). This may be due to the fact that we are worse at perceiving inverted facial features, like in the Mrs Thatcher illusion. In another variant (Sun et al., 2012), if they are lined up vertically the bottom face looks a little fatter than the top face (fig. 4, below). The effect is much less than with Jastrow’s arches, and experiments with chimpanzees (M. Tomonaga, 2015) show that they perceive the illusion of the arches, but not the fat/thin face.

Profesor Rafael I. Barraquer, ophthalmologist and medical director of the Barraquer Ophthalmology Centre