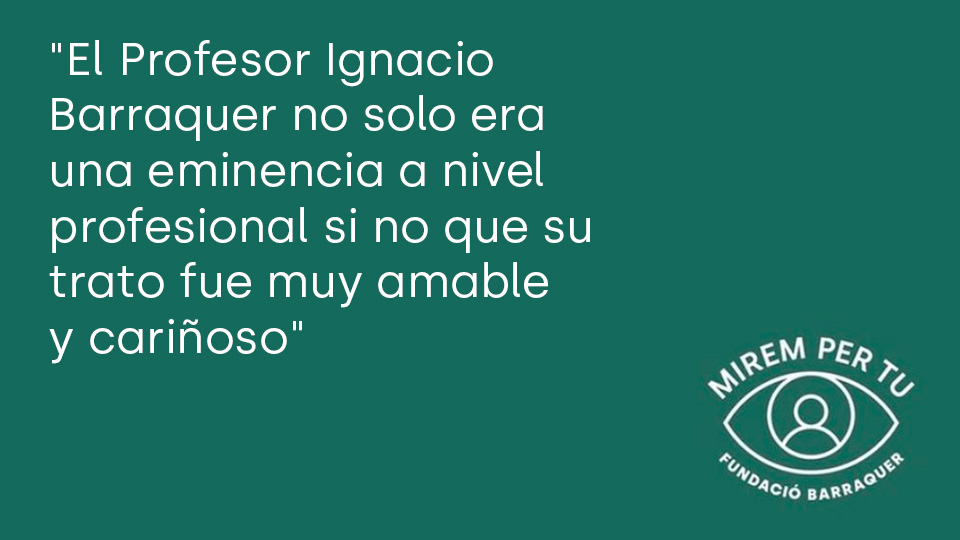 Few patients have been so close to the Barraquer Ophthalmology Centre for as long Enric Soriano.

Some years after his birth, the building works on the emblematic Barraquer Ophthalmology Centre building began, becoming the first single specialism ophthalmology centre in Spain.

At the age of 8, Enric's parents noticed that he had some difficulty seeing. The recently opened Centre had already garnered international prestige, and was an honour and a privilege for Barcelona’s residents.

Enric’s first visit turned into an adventure he'd never forget. He remembers the first time he saw Dr. Ignacio Barraquer. “He wasn't just a leading professional figure he was also so kind and caring, his hands were silky-smooth,” he says. The building, the areas he walked through before reaching the Doctor's consultancy, the Zodiac room, the classic sculptures in the corridors and the artistic references to Egypt, impressed Enric. “It was like being in a classic museum,” he explains with a twinkle in his eye. “His room was full of photos of artists of that period, Maurice Chevalier, Josephine Baker, Jeanette McDonald... and he played music too.

The visit went really well, they prescribed him glasses and Ignacio Barraquer told him, “your glasses must always be small because of the size of your head and the distance between your eyes. And remember, the frames should always be small even if people laugh at you.” He followed his advice until fashion no longer permitted. After some years, he went back to see about his sties. He tells us, “I didn't feel a thing, he did everything so well, it meant I didn't notice anything.” He was fortunate enough to have Prof. Joaquin become his doctor and whenever he visited him “...he was working with Dr. Uxó, who was his assistant at that time and a very good doctor,” Enric explains.

The years went by and Enric continued visiting the Centre seeing Dr. Pico, Dr. Lamarca, Dr. De Faria and Dr. Lázaro, all of whom gave him excellent and unrivalled care, just like the rest of the clinic and Barraquer Foundation staff.

Retirement came and with it one of Enric’s proudest achievements and one we cannot fail to mention. In 2004, he founded the Asociación de Perceptores de Pensiones no Contributivas (Non-contributory Pension Scheme Association) and thanks to his efforts, an increase in this benefit was approved by the Parliament of Catalonia in 2006.

He currently lives in Cornellà de Llobregat (Barcelona) in one of the houses overseen by the Caritas charity where he feels happy and thankful. He continues attending the Barraquer Ophthalmology Centre to have annual check-ups. Perhaps his life philosophy has helped him to keep going all these years: “To do good whenever one can, to love liberty above all else, never to deny the truth, even though it be before the throne” (Ludwig van Beethoven).