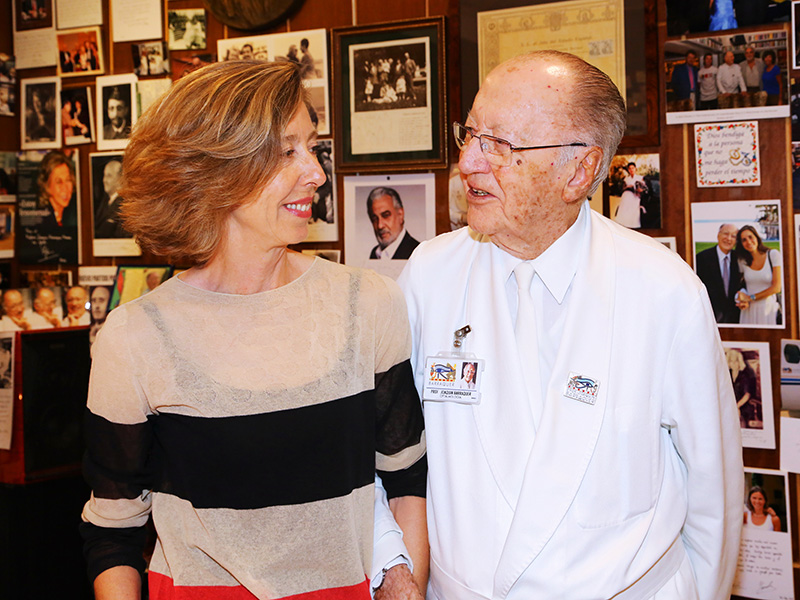 He has the charm of someone satisfied with life. Professor Joaquín Barraquer continues having fun. Tall and thin, he is elegant to the bone. He welcomes me to his office, on the fifth floor of the Clínica Barraquer. A cosy and intriguing room inhabited by a multitude of disparate objects, each of which has a story to tell. The walls are lined with colourful photos of smiling people looking at the camera. But there is one photo picturing two people who are not looking at the camera. They are concentrated on building a device on a large wooden table under the light of a reading lamp. A black and white photo of Professor José Antonio Barraquer and his son Ignacio aged seven or eight offers a window to another time, the beginning of a saga of ophthalmologists and inventors: the Barraquer saga.

A chauffeur of the clinic who knew my father well used to say: I’m off to collect that mechanics expert and amateur ophthalmologist.

Did he have the gift of construction?

Yes, he loved mechanics and used to repair his own cars. We had a fully equipped workshop where we built all type of objects, including a remotely controlled tank; a crane with two electric motors; a steam engine made from cans; a radio we built using old valves that my father obtained from Los Encantes... even the exoskeleton that allowed him to walk after the accident. In that workshop he stimulated my manual ability, an indispensable quality to become a good surgeon.

What happened to his leg?

He had a car accident. The doctor said there was no choice but to amputate his leg. But my father built his own exoskeleton, a piece of removable iron that surrounded his calf and foot and allowed him to walk. He wore it for the rest of his life.

It must have been very heavy.

Look, here it is. Yes, it is a very heavy device, but he never complained, he just went on with his work and good humour.

My father was a genius. He dedicated his life to his patients, but he also new how to have fun. He had many hobbies and a passion for high-powered cars, loved animals and making inventions, some of which were very useful.

Do you remember any in particular?

During the War there were power restrictions and my father made devices that ran on producer gas, which is burned as a fuel to produce electricity. In this manner, my father never left his patients unattended, although with certain difficulties.

He revolutionised the world of ophthalmology.

When he stopped performing surgery, at the age of 75, he took refuge in zoology studies. One day, observing how a leech picked up a pebble from the bottom of the aquarium and transported it, he thought that if he could train leeches he would solve the problem of cataract rupture during removal with tweezers.

No doubt, a brilliant man.

The observation of that leech gave him an idea and he invented a suction foot powered by an electric motor that created the vacuum required to easily remove the cataract.

And like all geniuses, he also had his eccentricities...

Yes, ha ha, ha... He once kept a cheetah and a cougar in the garden at home, which sometimes slept by his side while he attended patients. And two chimpanzees, Pancho and Jocko, who was his sunshine. He made her a coat like his own and would go Sandor together for an aperitif, at the former Plaza Calvo Sotelo.

What is the most valuable attribute your father passed on to you?

Love for the patients: healing, improving or consoling, but never misleading or abandoning them, because what can’t be done today can be done tomorrow. And he taught me to live life with a sense of humour and elegance. •