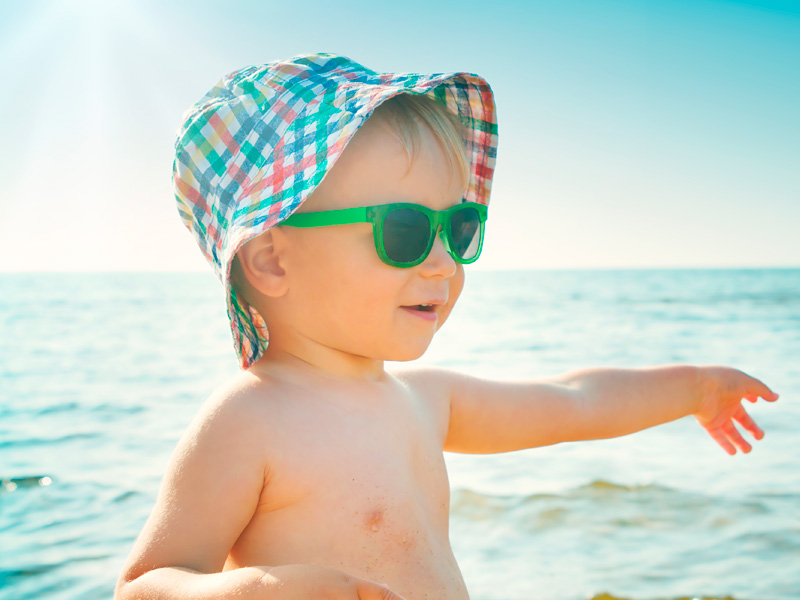 WHO recommends taking measures to protect your eyes and skin from ultraviolet index (UVI) higher than 3. A figure than in Spain is surpassed most days.

Most parents do not hesitate to put sunscreen on a child to avoid the risk of burning the skin, while the level of awareness is not the same with respect to the eye. The eyes, like the skin, have memory, and damage caused by excessive sun exposure is cumulative, and it becomes a risk factor for the development of various diseases. So we have to start taking care of sight from the first years of life.

The eye has a natural system to protect itself from UV. The cornea, the pupil and the lens act as natural filters, helped by the eyelids and the eyebrows. However, this protection is not fully effective in children because their eyes are not fully developed, so they are more vulnerable to the harmful effects of sun. Before the year, the crystalline lens does not filter up to 90% of UVA radiation and up to50% UVB radiation. Another reason that make children's eyes more sensitive is that the pupil is larger than that of adults, so it takes more amount of light and that the pigmentation of tissues is lower, consequently the effect of protective screen against radiation is lower.

Overexposure to sunlight on the eyes can cause short-term consequences, such as conjunctivitis and keratitis (sunburn), manifested in the form of tearing, red eye, itching or pain, but also causes serious long term eye diseases such as cataracts, changes in the conjunctiva, cornea and sclera and lesions in the retina.

To prevent injuries in children, the main recommendation is to undertake appropriate measures: Avoid direct sunlight and exposure at times when radiation is higher (between 12 and 16 hours) and make them wear sunscreen caps, visors and sunglasses with proper filters, since this way you can reduce the risk of certain eye diseases.

Children sunglasses  should carry the CE mark, block 100% of the radiation and not distort colours. Regarding the type of material with children is preferable to opt for organic lenses as first choice because they are more resistant to breakage on impact and are much safer. In addition, we must ensure that the sunglasses cover the entire eye and the lens does not obstruct vision, because we must not forget that the visual system of the child is in full swing.