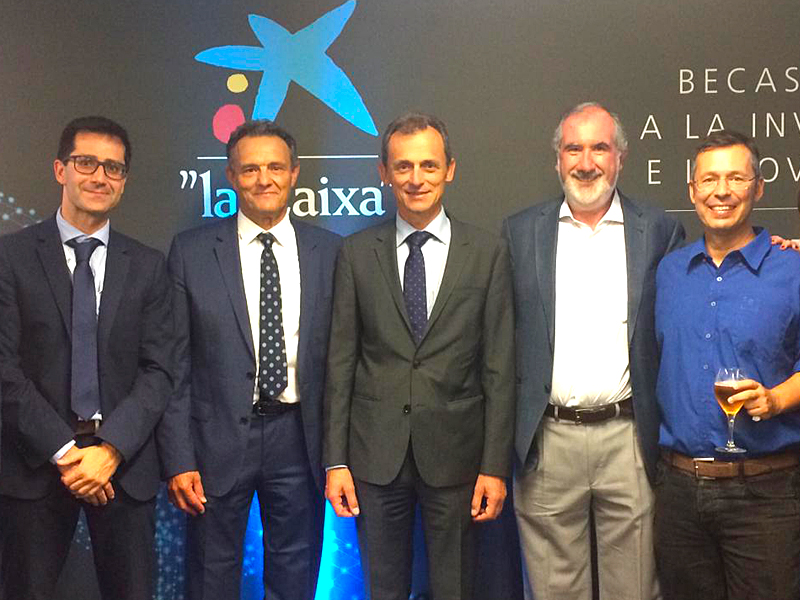 The Adaptive Retinal Implant Technology for Vision Restoration (i-VISION) project has been awarded a La Caixa health research grant. This is the second edition of a call aimed at promoting biomedical and health research projects with high social impact.

The grants consist of 1 million euros for research consortia, such as i-VISION, and half a million for individual institutions. A total of 22 projects have been selected from the 632 proposals submitted to the “la Caixa” call, which cover areas such as oncology, infectious diseases and neuroscience.

The beneficiaries now have three years for their projects to yield significant results.

The objective of the i-VISION project is to develop a retinal prosthesis technology capable of providing high visual acuity artificial vision to people who are blind due to diseases of the outer layer of the retina, such as retinitis pigmentosa and age-related macular degeneration.

In Spain, more than 15,000 and 700,000 people are affected by retinitis pigmentosa and age-related macular degeneration, respectively. Despite the progressive degeneration of photoreceptor cells caused by these retinal diseases, the neurons responsible for transmitting information to the brain remain alive.

Retinal prosthetic systems process images of the outside world recorded by a camera and stimulate these neurons through electrodes to recreate vision. However, the quality of restored vision in current retinal prostheses is quite limited.

The i-VISION project aims to improve this technology with the work of an interdisciplinary team made up of experts from research centers and clinics.

The tools to overcome the difficulties of producing such an innovative retinal prosthesis are the experience in nanomaterials, electronics, and microscopy provided by ICN2, the Institut de Física d'Altes Energies (IFAE) and the Institut de Ciències Fotòniques (ICFO), three institutions recognized with the Severo Ochoa Award for Excellence and founding members of the Barcelona Institute of Science and Technology (BIST), together with the physiological knowledge and clinical knowledge contributed by the Barraquer Foundation, led by Dr. Jeroni Nadal, and the Institut de la Vision (Sorbonne University).

The electrode material that interacts with retinal neurons will be graphene, a nanomaterial that will allow the use of increasingly smaller high-performance electrodes capable of bidirectional communication (recording and stimulation) with the retina.

The microelectronics of the prosthesis will implement closed-loop adaptive stimulation strategies and novel wireless technology to power the implant and transmit the electrical stimulus.

Advanced in vitro and in vivo imaging and recording techniques will be used to create a personalized map of the interconnectivity of the visual cortex and the retina and thereby optimize the visual acuity restored by the retinal prosthesis.

This work is the continuation of the THEIA project, by which ICN2, IFAE, ICFO and the Barraquer Ophthalmology Center laid the foundations for this new generation of retinal prostheses with the funding of two successive grants from BIST Ignite.

The technology developed is expected to provide immediate benefits to patients with retinal prostheses, and may later serve as a reference in the much broader field of neuroprostheses.