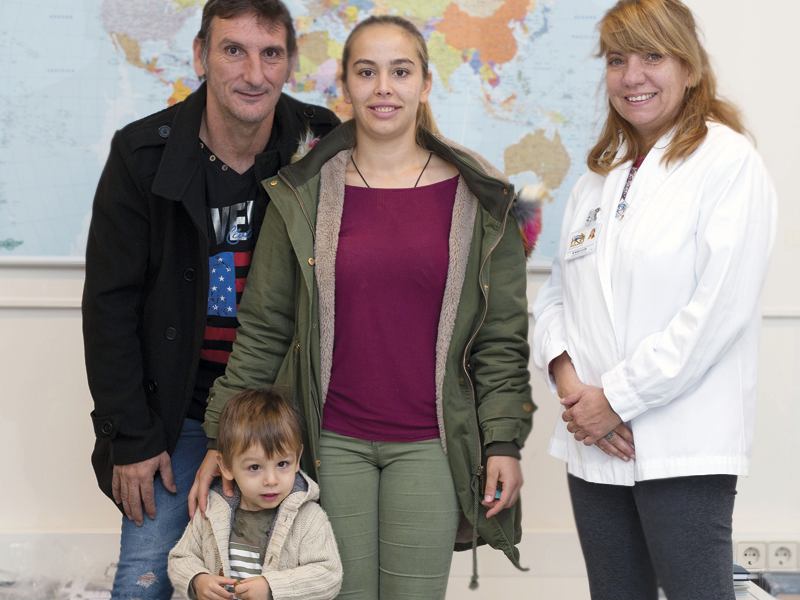 Antonio is now two-and-a-half-years-old. He's a naughty little boy who smiles and wriggles a lot! He came to the Centre when he was just 7 months old. He lives in Cartaya—a town in the province of Huelva—with his parents Sandra and Antonio and his sister Naima. Two weeks after his birth, his mother realised that his eyes significantly deviated their focus. After explaining her concern to the paediatrician over and over again, he told her that she was “obsessed. They sought further medical opinions, but didn't find any solutions until a relative recommended the Barraquer Ophthalmology Centre, knowing that another child in the family had received successful treatment here. After undergoing a medical assessment and evaluating the family situation, the Barraquer Foundation awarded them a grant so that Antonio could be seen in the Clinic. He was attended to by Dr. Rodríguez Ezcurra and he was diagnosed with early onset convergent deviation: a serious pathology if left untreated. So, in addition to the fact that Antonio was so young, it was vital to act quickly since the consequences could have led to a permanent loss of vision.

He has been to see the Clinic's medical team on different occasions. Antonio is making good progress. There is still a some way left to go and he still has to come to the Centre. Periodic follow-up and control visits will remain necessary until he is discharged. Antonio and Sandra feel that their son "is in the best possible medical hands" and they tell us that the treatment they have received from the doctors, medical secretaries and staff at the Foundation "deserves a ten out of ten” and “that such care really helps in this kind of situation”.