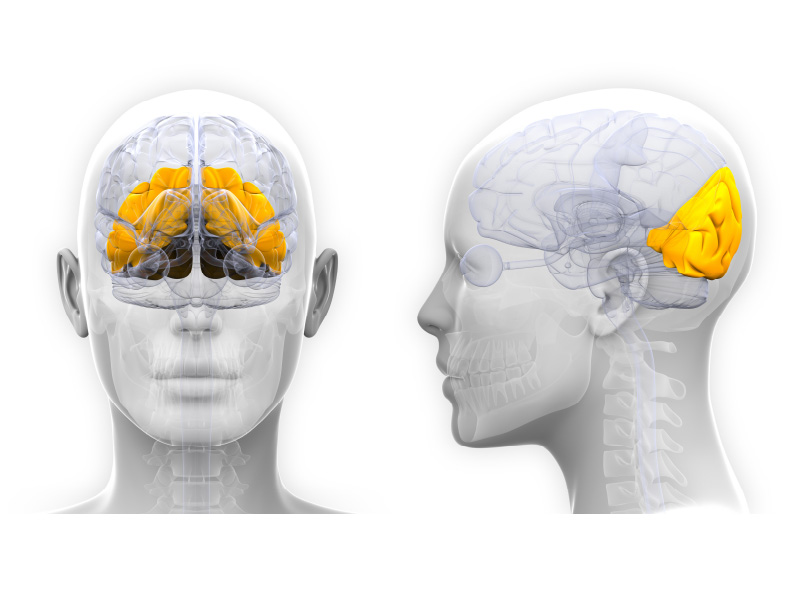 Our sense of vision is the sense with which we relate to each other, we assess distances, we interpret colours and we communicate in many regards with the outside world. It has huge emotional value for our species. The eye is an extension of the brain. Light reaches the photoreceptor cells of the retina that join up with the bipolar cells, the bipolar cells join up to the ganglion cells and from here it reaches the brain via the optic nerve (Fig. 1).

When the signal reaches the cerebral cortex in the occipital lobe, the image is created (Fig. 2 and 3).

Cortical blindness is due to a lesion in the primary visual areas of the occipital lobe of the brain, without any alteration of the visual organs (eyes and optic nerve) occurring. Those that suffer from this can perceive light and moving objects, so they rarely walk into objects and get the sensation of false blindness. It must be differentiated from Munchausen’s syndrome or simulated blindness.

Cortical blindness is a bilateral pathology. The most frequent causes are strokes (ictus), brain trauma (mainly due to car or occupational accidents) with associated brain haemorrhages and damage to the occipital lobe and infections such asmeningitis or encephalitis. The condition manifests itself with a sudden loss of sight, visual hallucinations, visual agnosia (the patient may not be aware that they do not see anything), it is painless, the eyes do not become red and the pupils continue to react to light.

Children may suffer from cortical blindness or neurological visual impairment from birth and under all circumstances the condition requires special care. Its causes include a lack of oxygen before, during or after birth, intrauterine or perinatal infections of the membranes protecting the brain (meningitis), or a lesion caused by trauma. Neurological visual impairment cannot be assessed until four months old, given that until this time the child’s sense of vision has not completed its development. When they are born they only perceive colours and shapes and they are mainly guided by touch, smell and hearing.

Transient cortical blindness is an uncommon complication arising from examinations using contrast agents. Its aetiology seems to be related to direct toxicity of the contrast agent accumulated in the lowest areas, facilitated by the passing of the vertebral arteries during mammary artery catheterisation. It can usually be solved over the course of various days and does not contraindicate new examinations with contrast agents.

There is no treatment for cortical blindness but it is essential to treat any neurological condition that may cause them or be associated with them. It’s important to start early treatment at a paediatric age to stimulate visual development.