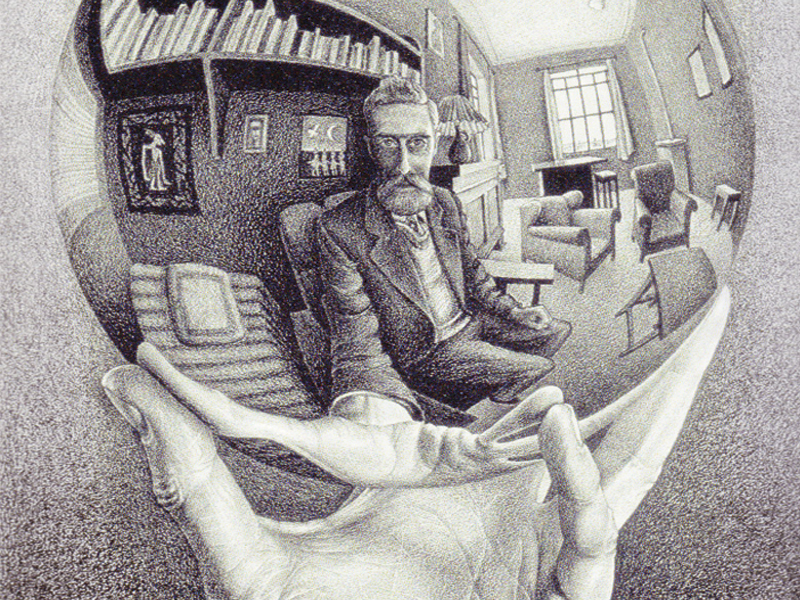 One of the greatest geniuses of the illustration of the last century, M. C. Escher, was born in June 118 years ago. While there may be nothing special about that number, this ephemeris is a good occasion to celebrate and revisit his unique art, based on mathematical concepts and optical phenomena.

Maybe because he was a sickly child in his native Friesland (northern Holland), Maurits Cornelis Escher (1898-1972) felt attracted to the bright and balmy Mediterranean. Around it he roamed for years, before returning to his homeland for good at the start of World War II. The landscapes and townscapes that predominate in his Italian period will later reappear as the background for many of his best-known works, unmistakeably inspired by mathematics.

Back to the cold and damp north, he developed optical or geometrical transformations often starting from his previous prints or sketches. This is the case of his famous “The Print Gallery” and “Balcony”. The latter is based in a view of the Senglea quarter in Malta’s capital, which Escher visited in 1935.

He also travelled through Spain on two occasions (1922 and 1936), and it is likely that his observation of the intricate mosaic designs at Granada’s Alhambra and the Great Mosque of Cordoba originated his passion for tessellation. Later on he would study the “wallpaper symmetry groups”, a branch of maths whose graphic interpretation led him to produce an extensive series of works.

His “Metamorphosis” series of very long woodcuts –of up to four metres– feature designs that tell stories based on polygon patterns or tessellations, which progressively turn into different animals and then elements of a landscape. Most amazingly, these designs interlock and divide the whole available space and, while playing with the ambiguous perception of figure and background, their successive transformations generate a narrative.

Departing from his initial interest in nature, Escher’s work evolved to the illustration of an increasingly introspective world populated by mathematical concepts like symmetry and reflection, space and perspective, geometrical transformations and infinity. This granted him wide popular applause, particularly in the scientific community, as well as some disdain from the official art world. In the upcoming issues we will continue to explore Escher’s fascinating world of unusual perspectives and impossible objects.